This is clearly a dup. Oddly enough, this question

came up as #8 in the list when I copied/pasted the title/body into a new question.

I am thinking an edit may be in order to push this higher (this is not the first time there has been a dup), especially considering the good answers and comments on it.

Before I went ahead and did it, I was wondering what other thought about it. I suspect "Do disabled modules affect performance?" would be best.

Changing the title of the question that appears as 8th suggestion doesn't help, as its position in the list of suggested questions depends also from the title entered when asking a new question; change the title, and the same suggested question can change position, or not be shown at all.

I would not edit a question, or one of its answers, just to push it up in the front page, hoping that it would be noticed from who is going to ask a questions that is its duplicate. If there is effectively something that needs to be changed, then an edit is fine.
Consider that 63 questions have been asked between today (and there are still 6 hours before the day is over), and yesterday. Even if you would push the question up the front page, it would not stay long in the front page.
Furthermore, a post is automatically changed in a Community Wiki, when it is edited from 5 different users, or 8 times from its author; the purpose is exactly avoiding useless edits done just to bring the question to the front page.

As you said, the user who asked the question already had a list of possible questions containing the answer s/he is looking for. It is true that the user is not blocked from asking the question, but it would be possible that the OP is asking a different question, despite the title being very similar to the title used from another question.
Stack Exchange shows also a list of possible related questions, when users are writing a question's body, but in this case it doesn't happen, probably because the text of the question is too short. I tried asking a question using the same title as the duplicate question, and using the text of both the questions you are referring, and this is the result. 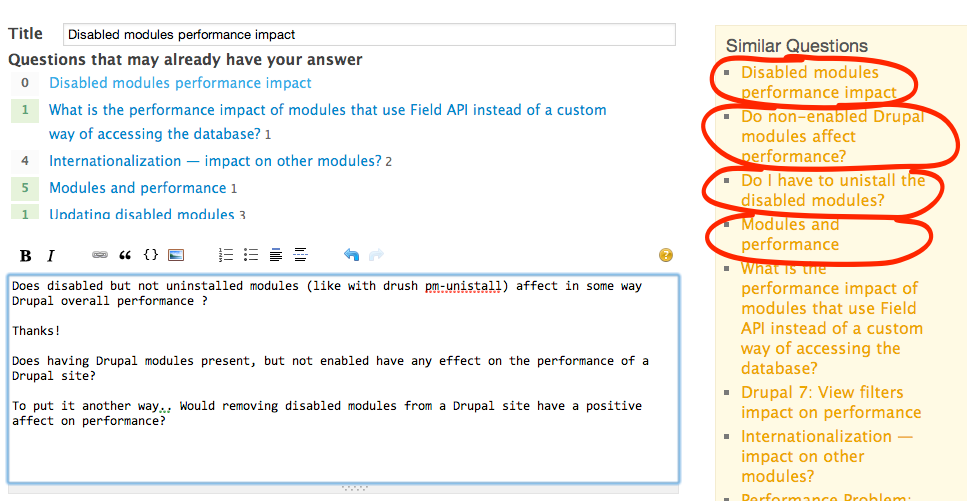 The questions you are referring are the first two, and there are other questions that could probably give more information about something that is related.

If users don't look to possible duplicates before asking a question, or they don't look at the questions Stack Exchange suggests, there isn't much we can do, if not closing the question that is a duplicate. If then you see a user who keeps asking duplicate questions, then you could also down-vote the question, as it doesn't show any search effort, which IMO it means also the user didn't search in the site for a similar question, before asking it. Once a question score is at least −3, it gets pushed out the front page.

Also, from the SEO point-of-view, duplicates are not bad: They help users finding the original, possibly answered question. If the previous question has not been answered, the duplicate points to it; users who find the original question through the duplicate could answer it.
That is the reason why duplicates are generally not deleted, from Stack Exchange sites. There are a few cases where the duplicate is deleted: When the two questions are using too similar wording, or too similar titles. (Imagine a "Disabled modules performance impact" question that is duplicate of "Disabled modules performance impact".)