Beyond experience points, how do SE ensure the quality of its community moderators?

The screen shoot below is from the suggested edit review queue. The name of the actual reviewers have been redacted to protect the guilty. 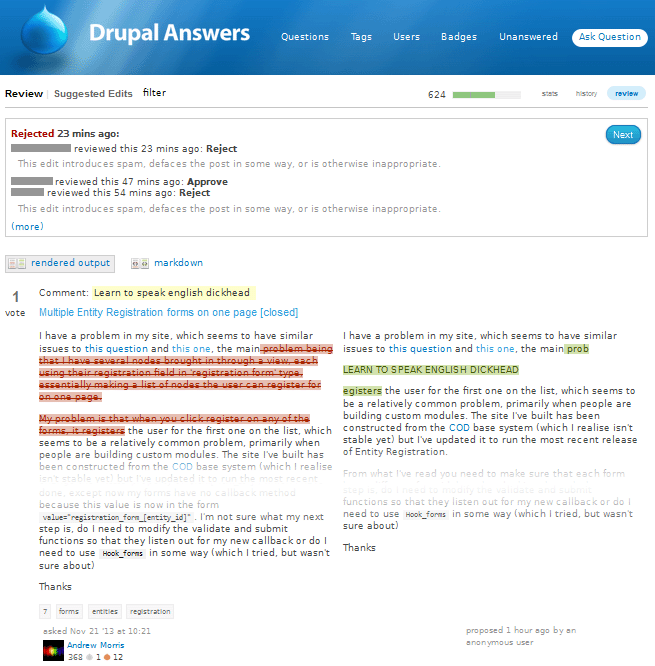 IMHO, one of the reviewers shows really bad judgement by approving this one. Not only is the proposed edit a vulgarism that never should be permitted on this site, but it is deliberaly inserted in a manner that vandalizes the original text.

As it turns there was one more vote for rejection than for approval, so the suggested edit ended up being rejected.

The only "qualification" I know about for being a community moderator for suggested edits is to have earned 2000 experience points.

Are there other "checks and balances" in place to ensure high quality and good judgement being the norm for community moderators?

In general, there are some checks an balances in place.

There are also review audits1. If you fail too many of them, you won't be able to review for a while (it's called a review bad).

Similar controls are in place for other community moderator powers (close votes, etc).

For actions that slip outside the controls, there are two options.

In this particular case, appropriate action has been taken.

1 Waiting on confirmation that this went network wide.

2
Use of 404 pages for users without permission mean links appear to be broken
2
Why was my “very low quality” flag declined?
4
What to do with suggested edits that add extra information to an answer
4
How can I 'reward' a user with points in a special circumstance?
2
How can the Community user approve suggested edits?
0
Are there any guidelines regarding tag wiki descriptions?
2
Why Suggested Review need 3 reviewers?
0
How to manage a community wiki?
0
Why does it take so long for some (popular?) wiki tag edits to be reviewed