Several of my questions have been the target of multiple downvotes that I see as inappropriate and unjustified for certain questions. The latest example is this now perfectly valid question, which I'd edited to meet the site standards as a result of following instructions on the Drupal Answers Help Center. The edited question and answer subsequently received two downvotes today, coinciding with leymannx's comment. Here is another perfectly good question that's received numerous unexplained downvotes.

Since I joined starting as a Drupal novice, this particular Stack Exchange site has struck me as dysfunctional and unusually critical. Some of the downvotes appear justified, especially once learning of actual duplicates or my initial assumptions or ignorance become evident. However, there seems to be a preponderance of unhelpful, often unexplained and piled-on downvotes as well as votes to close, without reasonable attention to subsequent question-edit revisions. This can only serve to drive away new users from the site while accomplishing little to anything actually improving the site's quality.

Another strange quirk to this site is the apparent distaste from those with reputation for adding new tags and rejecting new ones, for example the lacking Gutenberg tag. For comparison, the Wordpress stack exchange site has about 800 tags, whereas this site has about 150.

Case in point (and how meta meta and recursive is this!? Not to mention unsurprising): 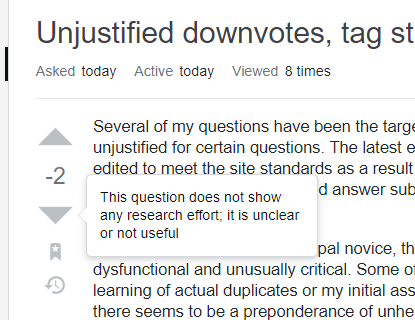 Here's another example of what seems to me to be a reasonable question. To boot, it ended up becoming an editor war over tagging it with 9, when I wasn't asking about Drupal 9, along with unexplained downvotes.

I wouldn't care so much superficially, but I've been prevented from posting questions until the system's perceived quality of them increases.

Re: Tags. DA has an odd idiomatic way of enforcing tag usage which looks to be the result of various interpretations of the SE guidelines.

The gatekeeping process being an explicit meta-discussion seems like an oddly insular process to me and doesn't look like it has been done for many tags (FWIW, I've only ever seen this done for version tags so perhaps there was other discussions I missed.)

It also seems to have created a situation where tagging doesn't help with the subject matter at hand. For example, look at the tag inventory:

4
What should the lower level of Drupal questions be?
2
How to handle users that re-add their deleted tags?
2
Why was the "Drupal-Concepts" Tag and Wiki I created deleted, without notification or discussion?
0
Why do we have so many unaswered questions in Drupal?
4
Differences between "updates," "upgrade," and "version-upgrade"
2
Where to draw the line to post an answer that is not really what the question is about?
2
Drupal's updated site theme is ready for testing!
1
"put on hold" question also locked