How can I flag every comment given to a post as obsolete without to flag each of them?

A question I asked has some comments that should be deleted because they are based on one of the previous revisions of the question. How can I flag them as obsolete without to flag each of them?

Flag the post for which the comments are, selecting "it needs ♦ moderator attention" as flag reason and "other"; then enter the reason for flagging, explaining the comments are obsolete. 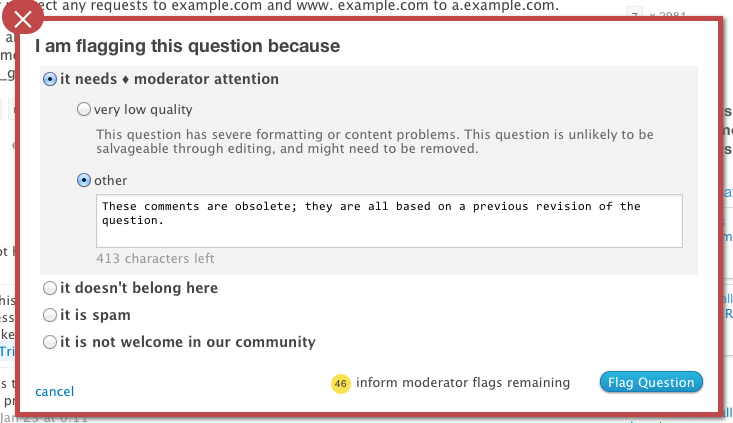 When flagging a post to remove its comments, preferably use one of the reasons used to flag the single comments:

Not the answer you're looking for? Browse other questions tagged support faq .

1
Can I see custom flags, or is this a comment automatically added?
2
How doesn't flagging a post for removing all the obsolete comments require a moderator's intervention?
0
Do posts use a revision system?
4
Is there a place to ask questions that are more opinion-based than fact-based without them being closed?
2
How can the Community user approve suggested edits?
2
Are these duplicates?
1
How to flag a post as off-topic because: Issues found in existing modules/themes
2
Can I edit and remove non related links from POSTS?
1
Do we allow users asking a simple question and answer it immediately after?