Do we want specific hash tags for automatic Tweets

The SE Twitter Bot will send out an tweet from @StackDrupal every few hours based on a magic algorithm.

Right now, the tweet will get the hashtag for the most popular tag on the post. Very often, it is something meaningless for this site, like #views, #images, or #fields.

There is a proposal on the Meta StackExchange site to allow per-site hashtags.

Do we want our own hashtag? What should it be?

Yes, there should always be at least this one hashtag:

By that we may raise the probability to get spoiled into the timelines of those people this whole site is relevant for. Without the #Drupal hashtag these tweets most likely will just run through without anybody noticing them. As #Drupal already is a widely accepted hashtag, we should go for it.

Look at the screenshot below. This tweet got tagged #blocks. But who on Twitter to reach with that tag? It's an in-site relevant tag. But outside of Drupal Answers this tag does have zero relevance. If it at least would have been #react that would be different. All tweets from here really must use #Drupal as this is what this tweet in a broader context is about. Upvote if you agree. 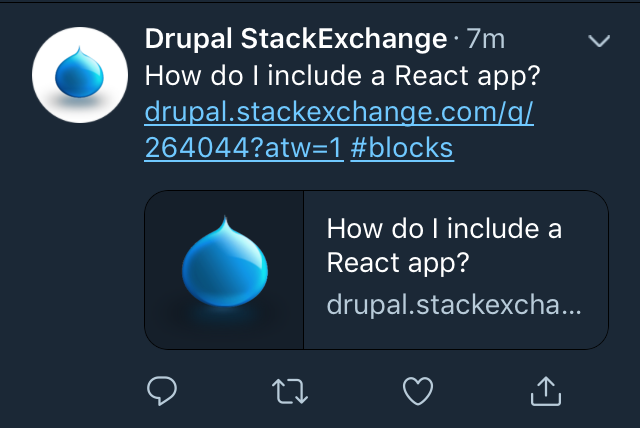