When should we improve a suggested edit, rather than reject it?

There is a suggested edit in the queue right now for Drupal Commerce - Multiple Shipping.

The title change can be seen as an improvement, but the suggested edit removes drupal-commerce, which I think is totally the wrong.

Have people been improving these types of suggested edits, or rejecting them?

Another way to ask this is, which is better: improving the edit to make the site better to rejecting the edit so the editor knows that retags like this are bad?

The question being asked is, "Is this even possible with current modules for Drupal Commerce?" which leads me to think the question is not about the Drupal Commerce module, for which drupal-commerce is thought. If the tag changes are not correct, then look at the rest of the edit being done. Is it useful? If it is useful, improve the suggested edit by changing back the tags as they were.

If you reject the edit just to be able to say to the user the tags should not have been edited, consider the second alternative:

As far as I recall, @-references work also for who edits a post; once you approve/improve the suggested edit, the user who suggested the edit becomes one of the users who edited the post.

If there are users who keep doing the same mistake in the suggested edits (e.g. systematically replacing a tag with another one), you already wrote a comment saying that is not right to do that (using a @-reference after improving one of your edits), and they keep doing the same type of edits, then you can:

When you reject enough suggested edits from that user, that user will not be able to suggest edits for 7 days. At that point, the user would notice suggested edits are not possible anymore, and (possibly) ask a question on the meta site, to which you can explain why the suggested edits have been rejected. Whenever choosing one option, or the other one, it is up to you. Consider that you could also leave the decision to somebody else, if you aren't comfortable with either the options. 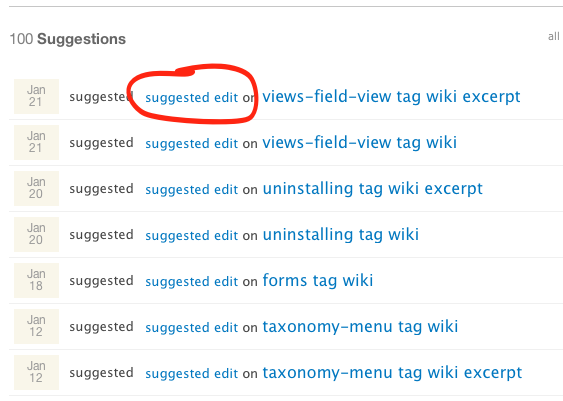 Until I don't click on the "suggested edit" link, I don't see if my suggested edit was accepted, or rejected. I still have to go looking for that information; I am not given any notification about that.

With this I am not saying that rejecting a suggested edit should not done. If the edit contained something good, and you want to teach the user, you can use the suggestion I made here.

See also What to do with suggested edits that add extra information to an answer.

The Overflow Blog
Featured on Meta

7
Why are most “high reputation” users worrying more about the “form” rather than the “content” of the questions?
0
Should not the users be suggested if not required to set the version in tags?
2
Look like bug in suggested edit
0
What should i do when a user have two account?
1
When should we need to answer our question?
4
Show notification for suggested edit
1
Do we approve suggested edit robo?
5
Improve the usability of the suggested edits review page
0
Unjustified downvotes, tag stinginess, and general site dysfunction